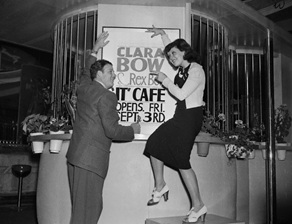 Clara Bow was born in 1905 in Brooklyn, NY. Growing up was not easy for Clara as she dealt with serious family issues and money problems, but she held on to hope and dreamt of becoming a movie star. As luck would have it, she won a contest in 1921 to be in a motion picture and she was thrilled! Clara went on to star in 46 silent films and 11 “talkies.” One hit was called “It” and Clara became known as the original “IT-girl.”

After retiring from her acting career, Clara and her husband decided to open the “It” Café in 1937. The café was located in Los Angeles on the corner of Hollywood Blvd. and Vine Street. Although the “It” Café closed its doors shortly thereafter, we applaud Clara Bow for her idea to bring hot coffee, delectable pastries, and (Clara’s specialty) stewed prunes to the people of Hollywood in her own unique, “IT-girl” way.

Have you ever owned and operated your own café? Have you ever visited a famous café or a café so amazing it should be famous? Let us know in the comments below and don’t forget to visit CoffeeCow.com for all your coffee needs!

Posted by CoffeeCow at 1:29 PM