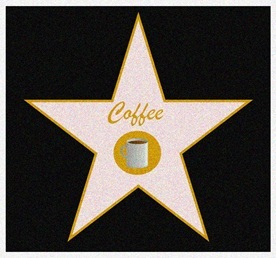 Is coffee famous? We think so!

Think about it – “Coffee” is a household name, everyone knows who “Coffee” is and Coffee’s presence is everywhere, all at once. Besides our very own famous CoffeeCow, we decided to make a list of other evidence supporting coffee’s fame.

Do you sometimes feel like you drink so much coffee, it could be your middle name? Well, what if it were your last name? Look at General Hospital actress, Claire Coffee, or famous hockey player, Paul Coffey!

Speaking of coffee places, there’s a famous coffeehouse named “Café Procope” in Paris, and it's not your regular Starbucks. This coffeehouse was established in 1686 and still exists to this day! Famous people in history frequented the Café Procope, like French writer/philosopher/playwright Voltaire. Not only is this café a piece of history, it’s also a coffeehouse that’s been around for 326 years – they definitely know what they’re doing when it comes to coffee. With that being said, adding this attraction to your Paris tour agenda is a must!

Coffee ought to be (& is) in pictures!

Here’s a clip from 1983’s Sudden Impact. Dirty Harry (played by Clint Eastwood) has the same cup of coffee every day and has been for the last 10 years – a large black coffee, no sugar. Unbeknownst to him, the diner where he makes his daily coffee trip is being robbed! As a cry for help, Dirty Harry’s waitress pours so much sugar in his coffee that he knows something is wrong with the very first sip and comes back to save the day…him and his partners Smith & Wesson.

Another coffee appearance takes place in The Bucket List, when Carter (Morgan Freeman) breaks the news to Edward (Jack Nicholson) about the expensive Kopi Luwak coffee he loves so much and how exactly it’s made. They get a good laugh, even laugh until they cry.

Ever feel like singing about coffee? You’re not alone.

So, there you have it. The evidence has been presented and this list is only just scratching the surface. Visit CoffeeCow.com today to celebrate coffee and what it brews for you.